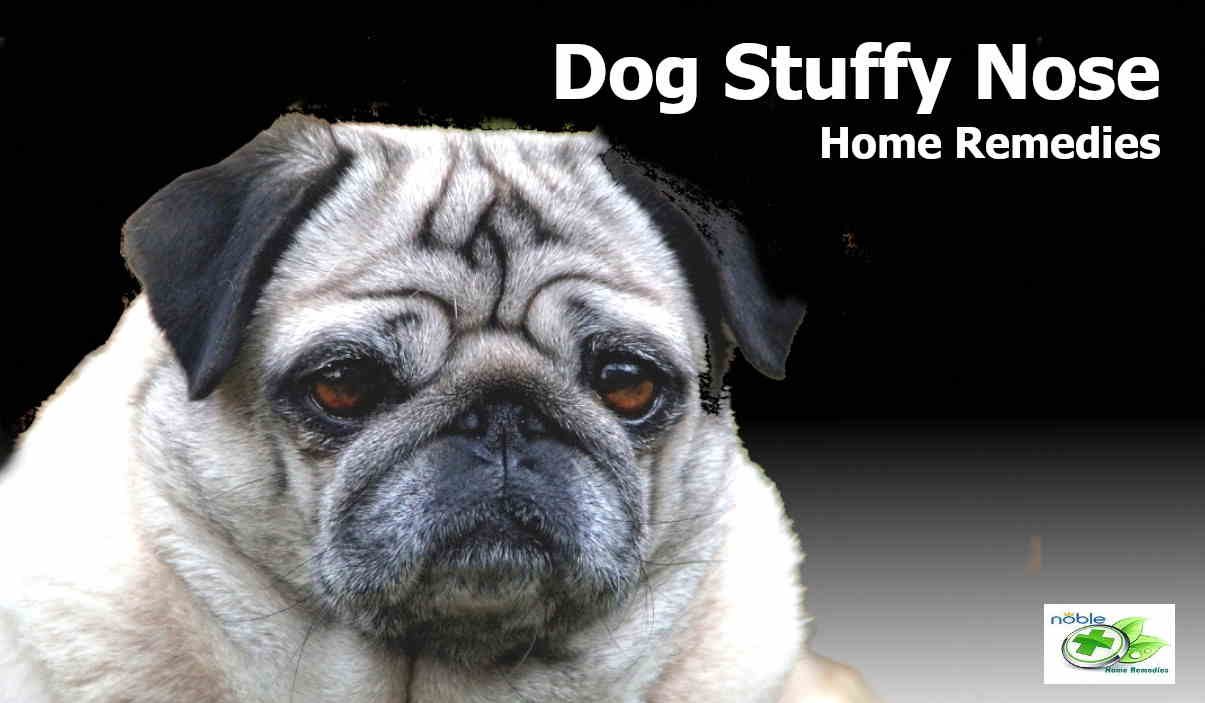 Dog stuffy nose means your dog is having a health condition. In this article, we are providing help for dogs to recover from the stuffy nose. Try the home remedies for dog stuffy nose and get your pet back on track.

Dogs may sneeze, cough, and may show other symptoms as a result of a stuffy nose health condition. If the dog is heavily sneezing, coughing, and have trouble breathing then better approach your vet. Make sure that your dog is not affected by serious illness.

What is Stuffy Nose in Dogs

Excess mucus makes the dog’s nose become stuffy. This happens due to two main health conditions of the nose in dogs.

Both the above conditions increase the amounts of mucus and lead to stuffy noses in dogs.

Many symptoms are observed in dogs that are affected by a stuffy nose. The main symptoms are:

Here are the main causes of the stuffy nose (Rhinitis and Sinusitis) in dogs:

Dog Stuffy Nose due to Allergies

You may notice a clear nasal discharge from the dog’s nose. That is a sign that your pet has allergies. Allergies are similar to human allergies such as:

Fall allergies are very common in cold countries. The above allergies may cause sneezing, itchiness, coughing, bleeding and breathing difficulties in dogs. Running nose is one of the main symptoms of allergies.

Dog stuffy nose home remedies are much simpler. These remedies only help mild common cold in dogs only. For severe cases get treatment from the vet.

Apply the following remedies only in case of mild nasal congestion. For severe cases, approach a vet to have the dog tested and treated.

Massaging nose gently - Gentle massage on the nose helps to drain off the mucus. Massage the nose and area around gently to remove the excess mucus.

Using a nasal aspirator - Nasal aspirator can suck out the excess mucus from the nose. Get yourself trained on how to use an aspirator on the dog’s nose.

Always be gentle. Always only the tip of the nasal aspirator should be inserted into the dog's nasal passage. Remember to clean it thoroughly after use. Never use a nasal aspirator that you use on your children.

Steaming - Steaming is a good way to drain the mucus from the dog's nose. It is very effective. The best thing you could do is let your dog be with you when you take a hot shower. The steam from the shower helps the dog to have mucus drained off from its nose.

Use of a humidifier - If possible, try to use a humidifier. It will increase the moisture in the air. This works well to clear the excess mucus from the nose. Ensure that a clean humidifier is used for this purpose. Else you will be necessarily inviting unwanted health problems to your pet.

As mentioned earlier dog stuffy noses could have been caused by certain blockages. The blockage causes a discharge from the nose.

Examine the dog's nose and look for any foreign particles. Mostly, nose blockages are caused by a blade of grass, seeds, etc.

Take extra care when removing these blockages. Use tweezers to remove foreign particles safely without damaging the nose tissues.

The symptoms of nose blockages are sneezing, nose pawning and bleeding.

If the nose tissues are damaged or bleeding gets the help of a vet to remove the blockage. Because he is the expert for this task. Further, the vet may prescribe antibiotics to prevent any infections.

3. How to Control Dog Nose bleed

When your dog's nose is bleeding you have to find the route cause. At the same time making an attempt to stop the bleeding is equally important.

Nosebleeds can happen in dogs for one of the following reasons:

Here the first level of actions you could take to stop the dog nosebleed:

If nose bleeding prolongs and does not stop in a few minutes, get the help of vet for treatment

If the dog is experiencing a stuffy nose for a prolonged period of time get the help of the vet.

Any type of infection causing stuffy nose include symptoms of:

All these symptoms are the result of the postnasal drip.

Bacterial infection: May require your pet to be in several weeks in antibiotics

Fungal infection: Your vet may prescribe antifungal drugs. Severe cases may have to go through surgery.

Treatment for Tumors and Polyps in Nose

Excess mucus and blood on sight indicate the dog has overgrown mucus-producing glands. This nothing but the polyps.

In this case, your pet may find it difficult to breathe. One side of the nose bulging also can be observed with such conditions.

The vet may opt for surgery to treat polyps. More possibilities for having surgery to be repeated. This is because polyps may reappear.

For tumors depending on the nature of it, the vet treats with surgery or radiation.

Here we like to give a bit of insight into using a nasal spray for congestion caused by allergies.

Saline nasal spray or pediatric nasal sprays may be prescribed for puppies and dogs to alleviate dryness and nasal congestion associated with a cold allergy.

According to Dr. Susan O’Bell of MSPCA’s Angell Animal of Medical Center in Boston, regular use is not recommended. The safe bet is the saline nasal spray in helping to break up secretions. This can be tried at home symptomatic treatment.

Mild stuffy noses or congestions are not considered dangerous for dogs. These last for a shorter period of time. Dogs may smell bad and look different when they are affected by a stuffy nose.

These are powerful home remedies for dog stuffy nose that can be safely tried. Monitor the progress and recovery period. If the stuffy nose is not going away do not delay going to a vet for treatment.

How do you unclog a dog's nose?

It is easy to unclog your dog's nose. There are four methods:

Detailed steps using the above methods are explained here.

How can I help my congested dog?

How can you tell if a dog has a stuffy nose?

There are many symptoms to know that your dog has a stuffy nose. The main symptoms are sneezing, swelling around the nose, facial abnormality, restlessness, and mucus nasal discharge.
For complete details on symptoms, causes and, remedies check here!

What to do when your dog is congested?

Copyright © 2021 Noble Home Remedies Media. All rights reserved. Our content does not constitute a medical consultation. See a certified medical professional for diagnosis.