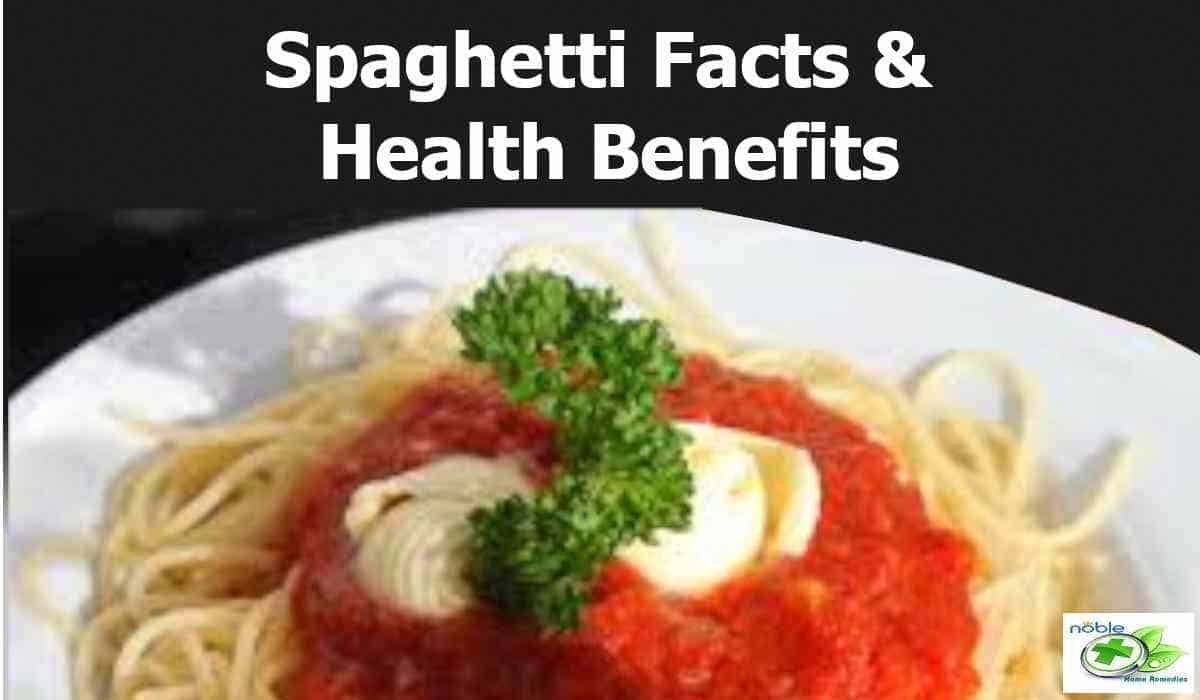 Many ask themselves does spaghetti has health benefits. Read further you will be more surprised to learn what is in spaghetti and the facts.

There are two types of spaghetti. Thicker one Spaghettoni and the thinner is capellini. But, both are in shape thin, long, solid and cylindrical pasta. it is worth mentioning that Spaghetti is traditional Italian cuisine.

The main ingredients in the making of spaghetti are milled wheat and water. Further, it is enriched with vitamins and minerals.

Particularly, the real Italian spaghetti is made from durum wheat semolina. Other types of wheat flour also used to make Spaghetti.

Spaghetti is white in color because of the use of refined wheat. Sometimes, they use whole wheat flour as well. In which case looks rather little brownish.

The original spaghetti long in length. As time passed, the shorter version of spaghetti became popular among people. Now the length of the spaghetti in the market is about 25 cm long.

Spaghetti is rich in carbohydrates because of the main ingredient wheat flour. Nutrients and minerals depend on how much has been enriched by the manufacturers.

The Italian style of the spaghetti is serving is along with vegetables, meat and tomato sauce.

What is the difference between Spaghetti and Pasta?

Actually, spaghetti is pasta but all pasta are not spaghetti. There are various types of pasta.

Each got its name because of its shape. In case, of spaghetti, it is long, thin, solid and cylindrical.

It is all goes down to the 5th Century of AD. Dried pasta is cooked in boiling water and portable. In the West, around the 12th-century spaghetti got the shape from the pasta.

In the 19th century, many factories were established. The factories began to produce spaghetti on a mass scale and were hitting the Italian market.

Later by the end of the 19th century extended to offer in restaurants in the United States. Serving with meat, vegetable, tomato sauce, and spices. Then added oregano and basil too with the serve.

Forms of Spaghetti in production

The cooking of fresh spaghetti supposed to be done within hours of production.

Factories only produce dried spaghetti. They use auger extruders for processing. This is to achieve a food extrusion form of processing.

This process requires extra attention to the details. Ensuring no air bubbles forming during mixing and kneading of spaghetti ingredients.

Drying requires special monitoring. Need be watchful to have strands of spaghetti are not sticking together. Also, it requires enough moisture not to get too brittle.

The packaging of produced spaghetti comes in various forms. Such as paper wrapping, boxes and plastic bags.

Dried and Fresh spaghetti, both are cooked in boiling water with salt in it. Then drained using a colander. The serving style of spaghetti only differs from country to country.

Spaghetti in Italian style served with tomato sauce. Tomato sauce is in a combination of many herbs, oregano, basil olive oil meat, and vegetables. Sometimes grated cheese is added to the spaghetti. The choice of cheeses for sprinkling on top are parmesan, pecorino or grana Padano.

In the United States serving spaghetti with Chili Con Carne is very common.

In the Philippines, it is Filipino Spaghetti. Served with tomato sauce and with banana ketchup or sugar. Also added with a large quantity of cheese, grounded meat, and sliced hot dogs.

What is in Spaghetti?

As mentioned earlier spaghetti is pasta made of wheat and water. Wheat is rich in carbohydrates. Besides, it also contains other substances such as potassium, iron, fiber and vitamin B.

Carbohydrates are our body’s main source of energy. This energy used for our heart, brain, muscles and kidneys functions.

The fiber content in spaghetti helps digestion. Especially the spaghetti made of whole-grain wheat flour.

Reducing the risk of prostate cancer

Spaghetti does not have cholesterol in it. Eating the right quantity of spaghetti makes you feel full. Thus keeping cholesterol-rich intake of food under check.

Actually it is good news. Consumption of pasta reduces the risk of cardiovascular disease, obesity, diabetes, and metabolic syndrome.

Once the pasta is cooked and cooled down it becomes starch resistant. As a result, digestive enzymes do not break it down.

It ends up increasing fat burning and lessening the storing of fat cells. By which, considered helps in weight loss.

To know your calorie expenditure requirements use the BMR calculator.

Eating pasta or spaghetti good for those who take part in sports or do physical exercises. Pasta is a source of carbohydrate and protein. It helps physical performances.

A person with a good and decent health condition, eating spaghetti can do more good to him than harm.

Copyright © 2021 Noble Home Remedies Media. All rights reserved. Our content does not constitute a medical consultation. See a certified medical professional for diagnosis.